WHERE HAVE I BEEN ?

Not been posting for a while, but been having a lot of fun with the little men. Work has been hectic and not really had time to post or update any of the pictures from March's Alumwell Games Society games day. So now that the pace has slowed a little I thought I would throw up a quick update.

The French Napoleonic army, well that is coming along nicely but no pictures yet. Don't really need to see photos of part completed units now do you. Four battalions / regiments (depending on your game rules) in all, two line one chauseurs and one guard. I promis I will get you some pics soon, they have been on the back burner now for far too long.

I have just got back from Wednesday Games night after having a game of 15mm WW2 tanks. I assisted the British contingent tonight. With three troops of 3 shermans (including 2 Fireflies) and 1 platoon of Infantry with a fourth armoured troop in support (this we never needed), we were tasked with a simple objective, locate and destroy the German force. 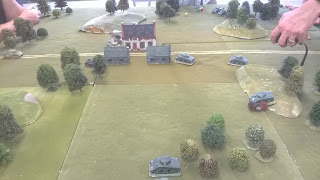 Early on we encountered fire from slit trenches situated at the front of a small village and a Puma advancing down a off a hill, My troop of Shermans were buzzed by a high velocity shell narrowly missing my Firefly, this was later identified as a Tiger. Our infantry took casualties from a direct hit off the puma. The Puma was quickly taken out by one of the Shermans and the Tiger was tracked pretty much putting it out the game due to its position behind a small building and limited field of fire. The slit trenches were riddled with MG fire from two troops of advancing Shermans, this proved very fortunate as the troops were packing panzer fausts which would have been lethal at close quarters. 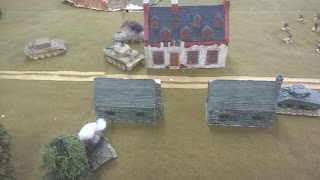 Two Panzer fours appeared in reserve one moving towards my tanks was destroyed by a direct hit by yours truly and the second stopped by a shot from the opposite troop across the board. Little did we know that two of our tank troops narrowly missed a mine field which had been set hoping to draw us in through and opening between two small woods, suffering only one immobilised tank we pushed on through.

The Germans did have what at first appeared to be a Panther but when hit this was quickly found to be a recovery vehicle trying to recover and repair the Tiger. Overall the opposition suffered heavily with some favourable dice rolls from the British allowing us to destroy our targets pretty much as soon as identified.

As promised here are a few pics of just a few of the games from the Allumwell show. 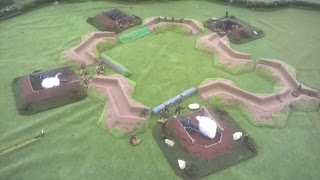 Easy company (Band of Brothers) take the guns at Brecourt. Hosted by Graham from my friends at the Wyre Forest Gamers 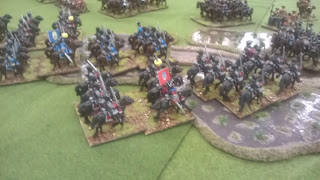 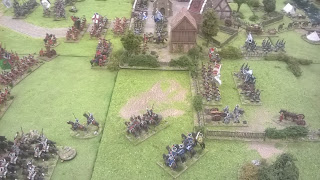 Derby War Games Society
fight a battle in the Spanish war of Succesion. 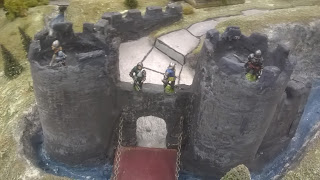 Finally a few games that have been on during my recent previous visits to the Wyre forest Gamers.

Sorry it's been so long, now on with the French 28mm.... Well maybe just one more game before.


Posted by LOST LEGION MINIATURES at 15:04 No comments: