Over The Hills and the Grande Armee

So with the current situation around COVID 19 restrictions, I find myself on furlough from work. With no weekend re-enactment events happening either and lots more time to finally finish the 28mm French Napoleonics that have been in their boxes,half built and half painted. I finally broke the painters block which I have had for some months now. 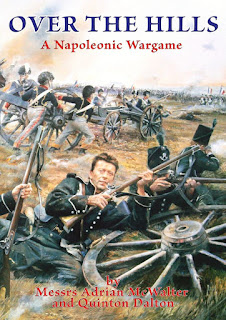 I have also found a rule system that I am now happy with, Over the hills concentrates more on the tactics and command structure of the units and their effectiveness. Esprit and combat skills are all calculated in on a single unit score, which is used through out the mechanics of the game. Basing is simple and no need to worry about unit frontages and guns able to bear, with most companies consisting of four figures to a base, representing approximately 100 men and a standard unit size of 6 bases (24 figures). With most units never being at full strength anyway, this allows larger or smaller units to be displayed by simply adding or removing a base of four figures for every 100 men. When adding or removing the bases you simply add or subtract 1 to the whole units SCORE.

No need to remove figures when casualties are taken the score is simply degraded or improved on Rally, which in turn affects the ability to stand, move and fight.

As all my figures were planned to be based on singular bases, this now presented another small problem they had to first be all re-based as 4 man companies. With this plan now in place I have managed to build 6 battalions, consisting of 2 battalions of old guard, 2 battalions of Chasseurs 5 bases each (soon to be increased to six each) and 2 battalions of line, another 12 bases. 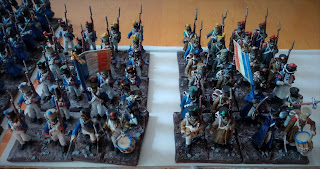 They are a mixture of Plastic Perrys, Victrix and Warlord miniatures. On closer inspection I realised that "La garde s'est cassée", the Guard had broken. Left half done for some time and not correctly protected they suffered some casualties, mainly bayonets and the odd broken leg. Luckily I had a lot of spare bits and pieces to make the neccessary repairs. I have now carried out some testing around ways to strengthen the tips of the rifles and bayonets, by first dipping them in various substances prior to any painting.

Super glue, PVA, hard ware store contact adhesive and two types of varnish, wood varnish and pledge floor varnish were tested. The results differ and though never able to fully provide a match for any metal counter parts, I found that the super glue and both the varnishes provided extra strength to the bayonets. So I guess a drop of super glue brushed along the end of the rifle and bayonets will be the norm from now. I already use a final gloss varnish of Pledge floor varnish on all my models to give a hard protective shell prior to dulling with a matt finish, so this again will had further strength.

I have left some of the bayonets off, as the voltiguers and other skirmishing troops would have usually fired their weapons with the bayonets removed, helping to improve accuracy. Any further breakages can just refer to a soldier being sloppy or preparing to skirmish (variety is the spice of life they say). All that remains to be done is final flocking and minor touches to base dioramas, but I will wait untill I have a few more bases and the British completed so as to flock all at once.

Brigade command figures will be provided by Dorsenne, Junot and Napoleon himself (currently on the paint table). I got these figures from Gringos 40 miniatures, the figures are very crisp and detailed. They are also an ideal match scale wise for the Perrys and Victrix. When they are finished I will be sure to post an update. I am now looking for a suitable mounted Marshal Ney.

Still got a couple of companies of French to paint, along with some singular skirmishers. With Over The Hills a unit has a pre-assigned skirmishing score and the only time you need to display skirmishing bases is if you wish to portray a skirmisher screen. This is not compulsory in the rules but can add to the aesthetics of the game. 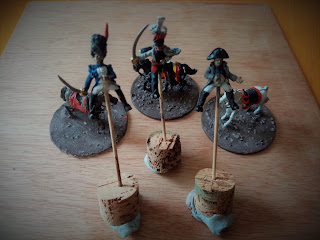 I have also been asked by a friend to partake in a game of Space 1899 which he is arranging. The plan is: He will set and display the table and maintain control as the umpire, while we provide orders and requests via email or messenger apps. He will then likewise move any figures and provide updates and images of the table and game. I will ask if it is OK to post the game reports here, it sounds an interesting way to carry on the hobby while in lock down or isolation.

So time to crack on with some British and then the Cavalry units.
Posted by LOST LEGION MINIATURES at 16:30 No comments:

Posted by LOST LEGION MINIATURES at 06:20 No comments:

Posted by LOST LEGION MINIATURES at 12:30 No comments: