THE 28th SHALL ADVANCE !

Well here goes, finally started the Napoleonic's for this years big build, going to be doing 28mm British and French late Napoleonic's. Thanks to Carl Bottrell who gifted me a collection of Perry and Victrix British Infantry and made the decision of what project for 2016 more easier. Approx 12 of the figures were all ready painted to a very high standard and the rest needed to be matched.

Well I have enough now for 2 battalions with more on the way.

First off I had decide on the regiments, and as Carl's painted minis were all wearing stovepipes that would mean probably the only regiment still wearing stovepipe shakos after the peninsular war were the 28th Gloucesters, who were part of the 8th Brigade under the 5th Division of Lieutenant General Picton.

Now I had to shave off all the shako plates ready for the 28th's regimental badge along with their back badge (these are now on the to do list, probably gonna use little big man studio decals). Next up assemble and organise into companies, 8 line, 1 light and 1 Grenadier. The grenadiers backpacks were swapped out for some French back packs as these were favored by the Grenadiers after being removed from the fallen French in Egypt. As some of the poses already assembled were not sporting the shoulder wings, they had to be fashioned from milliput. And all the guys got retouched cuffs and collars with white piping. 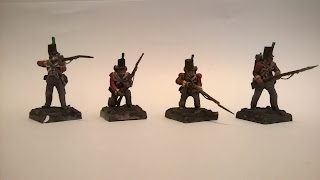 Some of the original minis as they arrived, sporting their new cuffs, collars and shaved shakos. 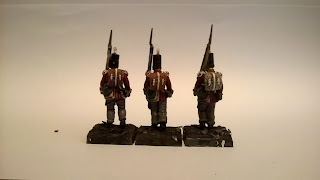 The Grenadiers get their new back packs, still a lot of piping to be added here though.

As I now have all the available minis painted to base colour, I have another 10 companies with the same yellow cuffs and collars, these will be the 2 battalion 44th foot, part of the 9th Brigade under Picton's command and will be sporting their new Belgic style shako. 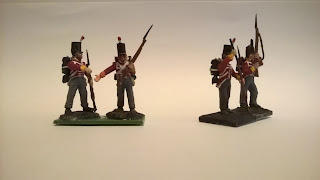 One of the 20 companies now assembled and painted to base colours only.

So now I am waiting for the next Allumwell Wagames Society Show - The West Midlands Military Show so that I can purchase the rest of the brigade along with the French.

Posted by LOST LEGION MINIATURES at 10:07 No comments:

Another great day at the Wyre Forest Gamers, played entirley with one of the members collection of both French and Austro Hungarian forces. The pictures don't do the figures any justice, they were a labour of love, and extra care was given to the facial expressions so that no two in each battalion were the same. I now have my work set out to complete my own 28mm Napoleonic forces. 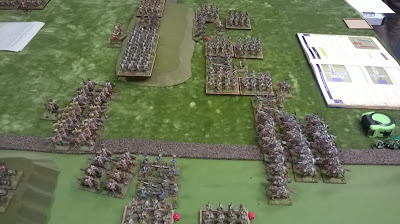 A fictitious battle was fought with each side having to allocate points to strategic positions which the opposing side knew nothing of, with the exception of one position being marked as a supply column. This represented the fact that each force would have its own objectives within the battle and the opposition would have to guess their intentions and change initial orders to re-act later, at a cost of initiative / command points. The Austrian supply column held more value than the French and this helped to show the fact that the French did not need to rely too much on supplies as they were trained to forage.

At the beginning of the game objectives were assigned and initial orders and movements sketched on to maps. I played the part of the Hungarian Infantry with a brigade of cavalry in support, along with another member who controlled an Austrian Brigade with another Grenadier Brigade in reserve protecting our supply column. As the French supply column held little value we decided to allocate remaining objective points to a cross roads and the larger of two hills in the centre of the board. We assumed the French would feint an attack through the cross roads being the shorter route to our supply lines and throw cavalry on a wide flanking charge down the valley between the two hills.

I rapidly advanced the Hungarians on to the crest of the large hill and deployed, while deploying horse artillery on the smaller of the hills my cavalry were deployed in waves the other end of the valley. The Austrian brigade moved to cover the cross roads.

Unfortunately it did not fair well for the French, with the exception of the feint their overall plan was a large arc flanking manoeuvre with their cavalry brigade against our supply column while taking both hills to cover their advance. Thinking the smaller hill was of importance to us they through a whole brigade against our horse battery, the remaining infantry attacked the lager hill where our Hungarians were deployed waiting.

The horse battery caused initial damage to the advancing French brigade who had lost their guns to a successful charge of one of my cavalry regiments. We later retired from the hill with no loss of objective; the French Cavalry were stopped by a charge of the remaining cavalry combined with lancers.


The larger hill was a hard fought contest we lost our guns to skirmishers but the French were pushed of the hill by accurate volley fire and losing the Melee to uphill detractors. The cross roads remained secure and uncontested at this point so the Grenadiers began to move forward to support the hills and carry the victory home.

Posted by LOST LEGION MINIATURES at 12:42 No comments:

Posted by LOST LEGION MINIATURES at 15:24 No comments:

So I purchased some Stuart tanks from and I must say it was a pleasure to find the usual amount of care and planning that went into the design of the sprues, with minimum visible production lines etc. On opening the box what I immediately noticed was the choice of 3 upper hulls and 2 sets of tracks on each sprue. This set me thinking, can I get more than 3 vehicles from the box?

Well after a little scratch building from stiff card the lower hulls were created and with a little bit of care full sculpting I easily reproduced the front gearbox housings and rear hull panels. This gives me three fully built Stuarts and three more complete hulls and still yet three upper hulls spare. Now as these were destined to be added to my Battle group British Armour, one of the hulls is easily left as is and with a rummage in the bit box for a heavy MG the Kangaroo RECCE vehicle was born.

And got them painted just in time for a Wednesday night game of WWII at AlumwellWargames Society. For this game there was a second outing of my Panzer army along with the British making their debut. The Germans this time however did not fair well.

The game was based around capturing and holding two vital bridges or if unable the British could destroy them. I was on the side of the British this time along with two other members, three more controlled the German forces, a seventh member played the role of umpire overseeing the game. We split our forces into three, a recce group of Stuarts and Bren gun carriers supported later by and an Achilles TD went for the one bridge. The second bridge was taken by armoured infantry in their half tracks and the engineers prepped ready for destruction.

The RECCE group advanced quickly but were hit by off board screaming mee mees the Crews in the Bren carriers suffering casualties, while the later Stuarts began to take a pounding from a concealed PAK 40 and advancing armour.

The Germans suffered equally on the opposite side of the board, losing three half tracks and their crews from a barrage of 105’s off board, and the over watch from a towed 17pdr along with the second Achilles and a Firefly which we chose to position on a hill (commanded by yours truly), in effect creating a barrage of 17pdrs which dominated the battlefield.

The Germans did have the Firepower of the formidable Panther and Stug, later reinforced by a second Panther. These however came in to late and thankfully a church prevented these attacking our overwatch with no line of sight. Two Panzer IV’s advanced on the first bridge to mix it up with the Reinforced RECCE unit but one was destroyed outright from our overwatch position with a second shot from the Firefly at near maximum distance. (The clubs rules allow the chance of hitting to increase if targeted consecutively, this imitates the crew’s ability to adjust fire).

We were able to hold the bridges even though both sides suffered losses, the Germans were unable to recover from the initial pounding. The Alumwell Wargames Society will be hosting their annual show The West Midlands Military Show on Sunday the 13th March click on the link for details and directions. Hope to see you there : )
Posted by LOST LEGION MINIATURES at 11:50 No comments: