Finally found a group of gamers that meet on a day that fits in with my schedule. Wyre Forest Gamers are a group of like minded wargames and military history enthusiasts. Had a cracking Sunday afternoon playing as a squad of grunts looking for Charlie.

Playing by the BODY COUNT rule set the game was set over two large tables with the space in between representing the river, a number of squads landed on designated landing zones across both tables and continued to sweep the area looking for enemy. Only the game controller new the precise location type and strength of all enemy forces including booby traps, tunnels and nests etc.

The game involved a bit of role play, and after each movement phase we were allowed to record comms. mesages out of earshot of the rest, which when played back to the rest of the squads (sometimes to the sound of gunfire) allowed a sense of unknown realism as to what the other squads were encountering. 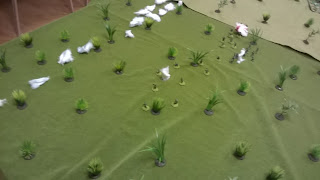 Yours truly (call sign Tree Hugger ) was requested to move to support another squad while they investigated a tunnel entrance. Unsure what would be in front of me I decided to call in an artillery probing round on the East river bank. Near bang on target caused a load of NVA to run straight toward me, taking 1 casualty and 2 wounded we dropped smoke and hit the deck. The squad I was supporting returned fire forcing the enemy back into the smoke to an impending full barage following the positive hit from the spotting round. What can be seen above is the resulting smoke screen far left. As my squad retreat to a medi vac location while being supported by a further 2 squads. Enemy unit strength was still unseen at this point as they are on the far left of the smoke screen. We never got to know either as shortly after the barrage followed and the Navy gun boats came up river and toasted the river bank with flame throwers.

Looking forward to lots of WWII and Napoleonics, may even dust off the Warhammer units.
Posted by LOST LEGION MINIATURES at 01:38 No comments: