So there I was the other morning getting ready for work, the wife calls to me “Have a look what some one has done to the car”........ oh crap I thought what is she on about..... So I went out side and some local fool, probably on the way home from the pub had decided to deposit a house FOR SALE sign from further down the road onto the roof bars of our car.

So rather than return it like a good neighbour should do I chopped the wooden stake into pieces for my chimenea wood pile and the corrugated plastic board is now coming along nicely.

Over twenty feet of various lengths of road section including junctions and crossroads : )
A visit to the pet shop for the necessary base material (sand / grit ) only 70 pence for a good sized bag of it. Then pop next door to the pound shop, Brown Emulsion £1.00, Grey Emulsion £1.00, PVA glue and filler £1.00 each and a small mixer pot of the paint I already have in the shed as a substitute for Bleached bone / Iraqi sand along with a few drops of white emulsion.

Not bad for under £5.00 and an hour or two here and there. Here's hoping that some one may decide to leave approximately forty square feet of 2 inch insulation foam outside the front gate then I can start my new gaming table. : ) 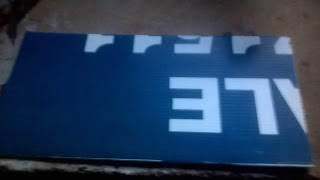 Cut the board into your required lengths, twelve inches is a good start as most gaming boards are in feet. Use one of your miniatures or vehicles / carts for an estimation of the width. I then cut square sections to use a junctions and intersections. Using these I then reduced the lengths of some of the road sections -1 and then – 2 of the square sections from each length. This gave me options to create various intersections while maintaining 12 inch lengths.
Stage 2:

Mix your PVA glue and Filler in a pot to a 50 / 50 ratio, and apply this to the road sections to create the required finish. You may want to create ruts etc. On a few of the sections I applied thicker applications and formed it with my finger to create shell craters. Random pieces of the lager grit can also be added to the middle of the road sections not forgetting to build up the edges to create the higher mounds on the side of track roads this can also be created by applying your first lot of base material (the grit) along the edges while the solution is still wet. Next sprinkle the sand generously over all the sections that have been coated with the PVA filler mix. Shake off the excess into a tub to save for the next time and leave to dry (a good 24 hours) maybe less.

Base coat all the sections in your required colour, I chose brown watered down a little to allow it to flow into all the gaps of grit and sand. Then allow to dry thoroughly before applying your first Highlight, by dry brushing a lighter shade of the base coat (this is where the white emulsion is added to the original colour) some experimentation will be required. An even lighter colour can be

applied later with an even more sparing dry brush.

Once the emulsion is completely dry you can then pick out individual pieces of grit with the Bleached bone.

You may want to further embellish the road sections with foliage or pieces from your bits box.
Posted by LOST LEGION MINIATURES at 04:09 No comments:

THE BATTLE OF BLOODY GULCH.

Had a game of Battlegroup with a friend from the Alumwell Wargames Society on Saturday gone. Set around the German counter attack after the initial battle of Carentan. The scenario is actually in the Battlegroup Overlord Book and it plays out as it was on the day, early morning of 13/6/44. Interestingly the area remains largely unchanged to this day. I decided to take control of the German forces, and wish I had taken more notice of the historical records. To be honest the game pretty much played out as was in reality.

The board has 3 objectives and the Germans start by holding objective 1 a small building on the South West corner. The Yanks initially hold Objective No 3, the farmhouse and the Germans deploy Fallschirmjaeger along the Western edge of the board. These are quickly reinforced by 3 Stug IIIs

Then again in turn 3 another 3 Stug IV's and     a  Pz Grenadier platoon from the Western edge. Turn 4 see further Pz Grens Platoon and an AT Tank Pak 40 on Western edge. To win I needed to hold position 2 a junction on the South East corner and capture and hold objective 3 from the Yanks.

The American Paratroopers were holding on by the skin of their teeth against a lot of German armour, but turn 6 and 7 see 2 troops of Shermans ten in total coming on from the Eastern board. As I decided to send most of my Stugs down the road they were mere target practice for the late arriving Shermans and the lack of turrets allowed them to be fired on at near point blank range with no chance returning fire.

Off board mortars and Artillery also played an important part, the Americans to begin with causing devastation amongst the pinned Fallschirmjaeger, and again later on when the Germans zeroed in on the Farmhouse. I did manage to get the farmhouse by deploying grenadiers who were riding on my surving Stug, but would not have been able to hold it as the americans still had a platoon of armoured infantry in reserve. If played to it's entire conclusion we agreed that my friend would have eventually hammered the remaining pinned German troops with HE, whilst retaking the farmhouse with his Armoured Infantry.


As you are probably aware it did not fair well for the German forces, but it just goes to show that you recreate history on the gaming board.


Half time was look in the loft at his H/OO model rail layout, and a much needed bacon and egg bap. We also discussed a new rule set command HQ and thought about combining the combat phases from this rule set with the battlegroup setup. It would play similar to the Napoleonic games we recently played, which themselves were a combination of Lassalle and Principles of War. Each battle group have a number of dice and 1 set can cancel out the other and the loosing force pick up detractors which when reaching the maximum loose the group altogether. The beauty of this is that 1 vehicle can represent a whole troop or squadron and the combat phase is more fluid. 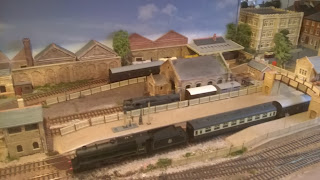 His pride and joy, needed to restrain myself from taking on another project after seeing this.

As you can see from the battle group tokens the Germans suffered heavily after an initial assault the Airborne troops were able to hold them off until armoured support arrived.

A test play of an ambush scenario with the alternate combat rules.

And another test play, in this instance a superior gun on the Jagd can easily take on a advancing troop of Shermans.

Posted by LOST LEGION MINIATURES at 15:16 No comments: