On Sunday 5th November Myself and two friends Tony and Graham played a game of Battlegroup at the Wyre Forest Gamers Club in Kidderminster. The scenario which was arranged by Graham was based on the action at Stavalot, which took place on 17 - 18 December 1944 during the battle of the bulge, between elements of the US 526th Armored Infantry Battalion and Joachim Peiper' SS Panzers. A first hand account written by Capt Charles A. Mitchell can be found here.

All the German 8 man squads had 2 MG42's mounted on bi-pods and allowed to fire both with one order, this immense rate of fire would prove useful eventually but still took a lot of orders to clear the woods. There were four objectives: 1, a warehouse 2, a bridge (which was set to explode) on the west end of the river and 3 and 4, two houses within the town North of the river.

The US forces commanded by Graham were occupying the town North of the Ambleve river and had forces including Anti tank guns occupying a wood to the South East and a Warehouse on the South West of the board. Me and Tony played as the Germans and were to enter along a road on the South East corner. Tony immediately entered a building and attempted to suppress the US MG squads in the woods, the US return fire under AMBUSH orders. More infantry sections moved to and around the House on the South East corner, and a fierce exchange of fire was exchanged while Panthers moved along the road to the South.
One section of grenadiers took casualties but elected to fall back supported by a second section and finally a 3rd who managed to pin one of the US 30 cal. positions. The US troops stood firm in the woods and this was proving a stubborn obstacle as our Panthers were unable to cross the field unopposed with 2 AT positions covering the route as our flanks would be exposed, a further position on the South Bank of the river opened up with a QUAD cannon.

I was able to pin the AT position on the South West corner with one of the Panthers and a second was put on reserve move. The US AT gun in the woods was finally silenced and a 30 Cal. team killed forcing Graham to take counters (one of which resulted in an immobilisation token being pulled out the bag and placed on one of our lead Panthers). Never mind we still had its gun to use to support the others, some of which were on reserve move by now.

Turn 4! things were starting to look up and we decided to let the cats loose. I destroyed the AT position on the South West corner of the board with H.E. From a Panther allowing my second Cat to move to a fire position on the corner of the road ready to suppress further Infantry in the Warehouse. At this point the rest of the Panthers and a King Tiger were able to move out across the field with infantry in support. Graham decided to err on the side of caution and retreat from the woods (with Tony hot on his heals). It was now that Graham had forgot to mention a very small but crucial element to the scenario, we needed to hold an objective by turn 8 or suffer a penalty of taking a battle counter at the end of every turn. (No time for chess then).

Turn 5. The Quad had been silenced by now and this now allowed us to spread out. Tony would concentrate his forces on the right flank and I had the task of taking the warehouse. Our second Infantry platoon took up position to support the panthers on the South West corner and our engineers moved along the road ready to deploy for the bridge.

Turn 6. US reserves move on from the North and are accompanied by two Wolverines. We decide to call in our off board 105mm artillery and target the buildings north of the bridge and manage to pin a squad of infantry and a second troop being carried in a soft skin truck. We also began hammering the infantry in the warehouse with HE from the armour but they survived again and again and again!

Turn 7. My Panthers are fired on from the Wolverines (PING!), the favour is returned and scratch one Wolverine.

Turn 8. The US forces occupying the warehouse finally started to take casualties and retreated to the other side of the river. My engineers who were earlier put on a reserve move now moved at top speed in their half-track to the outskirts of the warehouse during Graham's turn, and deployed in their own turn moving straight into the warehouse. As they deployed within its footprint they automatically entered under cover from MG squads and tanks on AMBUSH fire.

Turn 9. The Panthers and MG's now begin to pepper the buildings and US forces are pinned.

It was half past six and the decisicon was taken to end the game, it was obvious that Graham would not be able to have stopped us from crossing the bridge with our engineers dis-arming the explosives under heavy covering fire. Any armour or anti tank capability he had, had already been taken care of, already used up or constantly pinned.

During the many games that are played over the afternoon at the club we were visited by the local Tiger, it would be rude not to give it a mention or have taken the photo. 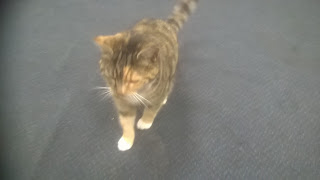 Posted by LOST LEGION MINIATURES at 10:56 No comments: