Sorry I haven't been posting as of late, but to be honest there was no reason. I believe it is what is called painters block. Just haven't been able to be motivated, what with getting a new job and all the re-training involved with that. The last company I worked for was causing so much stress I didn't notice it until recently and I guess with the long hours and late finishes I just couldn't pick up a brush.

Dad passed away in February after battling Parkinsons and lots of work around getting Mom sorted and settled. (Planning a raffle shortly to help raise funds for Parkinson's UK) on the run up to my Entry in this years London South Mudder.

Any ways that was then and this is now, the Operation Overlord figures are for the most completed with stacks of tanks and artillery so lots of pictures soon I am sure.

Took a visit to Bridgnorth the other day and found a nice little collectibles shop with all sorts of goodies in there. Including these fellows, a full set of 6 for £27.00 not bad I thought. 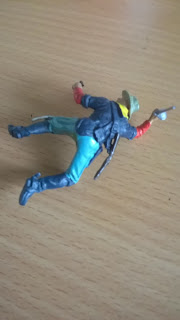 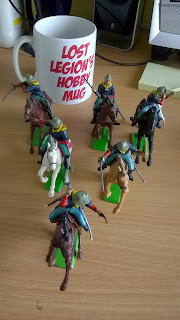 On closer inspection I noticed that the slung rifle on one of the figures was missing its weapon tip, a common problem with these vintage figures. However a new bottle of super glue that I bought as a pack of five from the pound store came complete with flexible applicator which tapered down nicely to approximately the same dimension as required.


So out came the scalpel blade and two minutes late.. hey presto!


All I need now is to match the original paint and no one would ever know. That is except everyone of you that has now read this blog entry. 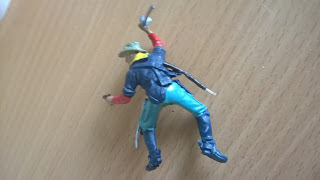 Don't forget to Hi from Dave at Lost Legion Miniatures. If you are reading this Martin..... Many thanks for the Brushes. Better start putting them to use.

Posted by LOST LEGION MINIATURES at 08:04 No comments: